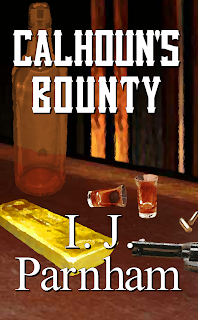 Available as a paperback and download from amazon
Posted by I.J. Parnham at 04:43 4 comments: 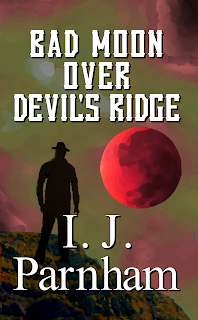 When Sheriff Cassidy Yates rode into Eagle Heights he never expected he would be in jail by nightfall on an unfounded murder charge. Although Cassidy answered the charge, it was only at the cost of implicating his own wayward brother in both this murder and the kidnapping of the dead man’s widow.
Against an escalating conspiracy of fear operating in the town, Cassidy gains the help of a young newspaper correspondent in his quest to find the real killer and the kidnapped woman. But with gun-toting ranchers and numerous hired guns standing between Cassidy and justice, can he prove his brother’s innocence?

The Mystery of Silver Falls in paperback 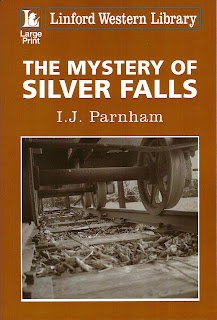 I find this cover very entertaining. It's so uncompromisingly dull that I can't help but love it. Even better, this is my 27th Linford Western, and that's something of a landmark for a deeply sad git like me. I've enjoyed watching the list of titles on my 'By the same author' page grow steadily over the last fifteen years or so and the last book filled the page making me wonder what would happen for the next one.

And now I know. I got a second page!


The whole town turns out to watch the first train journey when the bridge at Silver Falls is completed, but the day turns sour when Kane Cresswell and his gang arrive. They raid the train and, in the ensuing chaos, $50,000 falls into the river, seemingly lost forever. Wyndham Shelford is determined to find the missing money, but when bodies start washing up, unconventional lawman Lloyd Drake arrives. He is convinced the train raid wasn't everything it seemed...
Posted by I.J. Parnham at 05:39 357 comments:

The Secret of Devil's Canyon now available on Kindle

The Secret of Devil's Canyon is now available on Kindle. This was my 21st Black Horse Western and the 5th Nat McBain yarn. 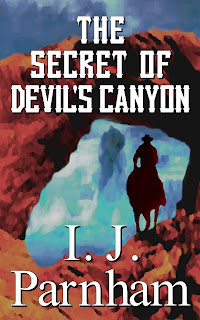 This tale follows on directly from The Gallows Gang, in which Nat McBain and Shackleton Frost agree to work together to take prisoners to jail. It also has a sub-plot about bone-hunter Jim Dragon and his eternal conflict with Pierre Dulaine. I enjoyed this sub-plot so much that Jim returned in Incident at Pegasus Heights.

I've only just realized that like Bleached Bones in the Dust a key moment in the plot revolves around finding bones that have been buried out there somewhere....


When Mayor Maxwell and his daughter are brutally murdered, feelings in Bear Creek run high. Even when the killer is caught and sentenced to life in prison, the townsfolk demand a lynching. So Sheriff Bryce calls in Nathaniel McBain to spirit the killer away through Devil’s Canyon to Beaver Ridge jail.
At first, Nathaniel manages to stay one step ahead of the pursuing mob; but as he loses ground, he realizes he faces an even bigger problem: his prisoner could be innocent after all. . .
A dark secret about what really happened is buried in Devil’s Canyon. Will Nathaniel be able to uncover the truth before the mob reaches him?

It's now available from all good amazon stores.
Posted by I.J. Parnham at 04:19 1 comment: When Trip Kincaid saved Milton Calloway’s life, Milton was so grateful he gave him his saloon at Calloway’s Crossing. But when Trip arrived to claim his property, the saloon wasn’t what he expected – it had in fact collapsed into a bubbling pool of mud!

Undeterred, Trip rebuilt the saloon. Within hours of opening, Ryan Trimble’s protection gang muscled in on him and his only compensation was the distraction his bartender, the beguiling Grace Theroux, provided.

Trip needed help to defeat Ryan and it arrived in the form of a mysterious gunslinger – but at what price? Before long, Trip faced the fight of his life to save not only the saloon but also himself and Grace.
Available as a paperback and a download from all Amazon stores.
Posted by I.J. Parnham at 01:36 No comments:

All Must Die in paperback 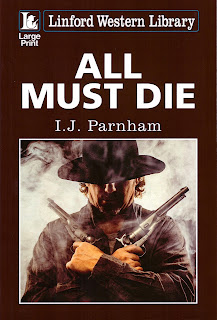 It would have been nice to get a more dramatic cover than this, but . . . only joking. This one goes right near the top of my favourite covers. In fact I like the cover a lot more than the one on this book: 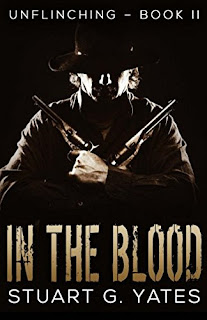 On the other hand it's about as good as this one: 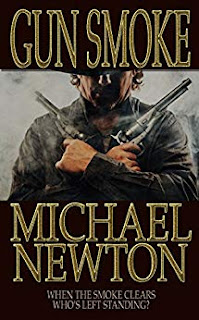 Although, on balance, it's perhaps not quite as good as this one: 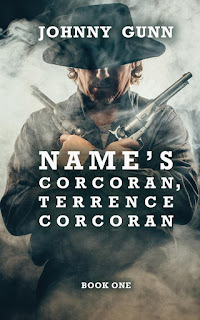 Anyhow, this is my 26th Linford Western.


Ten years ago, a spree of murders shocked the townsfolk of Monotony. The victims were shot and dumped, with words scrawled on the ground beside them. When Sykes Caine was arrested for a bank raid, the killings stopped... Now Sheriff Cassidy Yates must deal with a perplexing case. A man is shot to death - and words are scratched into the ground by the corpse. With Sykes now released from jail and back in town, the finger of suspicion is pointed squarely at him...

Gunfight in the Red Eye Saloon now available on Kindle.

Gunfight in the Red Eye Saloon is now available on Kindle. 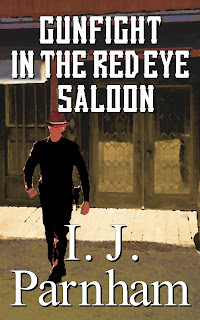 I started writing this story with the intention of it being my next Black Horse Western, but it ended up being about 10% short of the required length for the series. I put it aside for a while and then came back to try to bulk it out, but I only ended up shortening it some more.

After several more failed attempts I decided to just leave the tale well alone and publish this as a Kindle title. This is the 6th Cassidy Yates's yarn, in which he rubs up against a fellow lawman he doesn't trust. . . .


Sheriff Cassidy Yates reckoned he’d foiled a bank raid in Monotony, but then he discovered that a safe deposit box had been broken into. Nobody knew what had gone missing, but Cassidy suspected that the robbery was connected to the infamous gunfight that had erupted in the Red Eye saloon two years earlier, an incident in which five men died.

Severin Lorde never paid for the crime he committed that day, but in a twist of fate he was appointed as the sheriff of Carmon. Cassidy was determined to prove that Severin had a murderous past, but to bring a fellow lawman to justice he will have to risk not only his life, but his faith in the law he has sworn an oath to uphold.

It's now available from all good amazon stores. 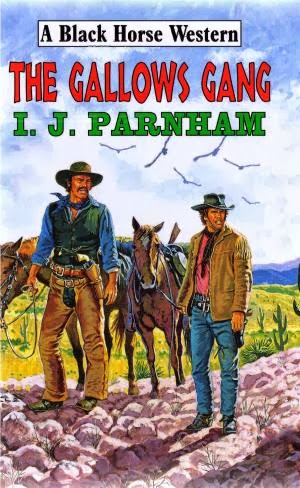 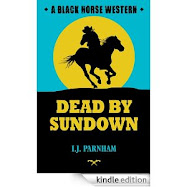 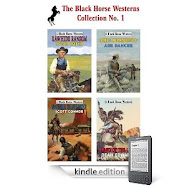